Yesterday, August 11, Michael Phelps, the greatest swimmer ever won his thirteenth individual gold medal.  In so doing, he broke the record of the greatest of ancient Olympians, Leonidas of Rhodes, stuck for 1600 plus years at twelve.  Arguments can be made as to whose achievement was more overreaching – travel, training, diet, lifestyle and level of competition are all so different.  But even the most ardent of purists would have to recognize that the modern swimmer’s feats are unparalleled.
Absent for the modern athlete is a bard or poet such as Homer or Pindar to memorialize the achievement.  It has been a long time since any new Olympian victory odes were completed.
In poor substitution, and with vast apologies to Pindar and any other ancient Greek whom I might offend, I present this effort.  The complex meters of Pindar’s odes were beyond me, so I fell back on dactylic hexameter, fitting I think for the extraordinarily epic nature of Michael Phelps’s accomplishments. 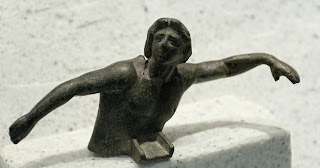 Glory, unquenchable son of Poseidon!  Your epos sings forward through
age and the passage of countless Olympiads.  Timeless, yet measured in
intricate seconds and fractions of moments.  Ephemeral.  Frozen and
captured in images, sweet preservation of youth’s endless power.  Yet
aging before us, through photograph trickery – ever compared with the
specter of earlier triumphs, of golden medallions engraved with
lost cities – Athens. Beijing. England’s capital. Now with a tropical
paradise.  Pool edge to podium, change is untraceable.  Victory
stands in identical prominence, heedless of year or location.
Glory, impossible national treasure, whose exploits rewrite every
Olympic history.  Lists you’ve rescripted of champion’s banners and
futile nemeses, lurking and snatching a victory, finally,
only to fade back among the broad registers of all the vanquished.
Glory, great flag bearer, larger than life, and reminder that swimming and
other sports not wreathed in helmets and uniforms still can be meaningful;
capture attention and imagination, if only quadrenially.
Every four years your face rises, grinning and tragic, from depths of the
green natatorium.  Wingspan, as broad as the oars of a trireme,
beats first the torso then conquers the water with ruthless endeavor.  E-
longated fingers trip electric sensors as watchful as Argus, then
clench in victorious power to splash on the overcome waters.
Every four years you leap from the height of the starting block, pushing your
intricate muscles beneath the smooth battleground, surfacing buoyantly,
hardly a splash made, yet farther than each of your flound’ring opponents,
gaining momentum in uncanny fashion despite the exhaustion of
moving through glistening pressures not meant to be mastered by humans.
Glory, indominant son of the waters whose Olympic legend is
safely entrusted to history and the persistence of myth.
Keith Mankin, 2016