I have a cold. Which reminds of the elegant Esquire essay, “Frank Sinatra Has a Cold” written by Gay Talese in 1966, when magazines like Esquire mattered. It explores several days in the life of the aging icon, as he faced his declining years and a TV special that purported to reveal his mob connections (what a shock!). But it is really a study of self-doubt and recrimination. It should be mandatory reading for any writer – or anyone for that matter, but who does mandatory reading anymore?

In 1966, Sinatra was still at or near the height of his powers. He had not yet recorded “My Way” or “That’s Life” and still sold albums as regularly as any artist, despite the onrush of the ever-threatening young folks, such as the Beatles, the Turtles, etc. Within a few years, Sinatra would cover the Beatles’ hit “Something”, regrettably in my mind. But he was no longer the Chairman of the Board. Or perhaps it was safest to say, there was no longer a Board for him to be Chairman of.  Various scandals, jealousies, personal foibles had created cracks in the Rat Pack. Or maybe a huge swath of America had grown tired of watching privileged morally challenged men cavort in drunken nightclubs. We look back now at such times with deep nostalgia (“Those were the days”) but when they were the days, there was little to celebrate about them except by an aging and increasingly reactionary crowd. Sinatra understood that, or at least with his defenses down and feeling under the weather, he gave into the weight of his advancing irrelevance.

The profile made him seem almost human. Sinatra hated it. 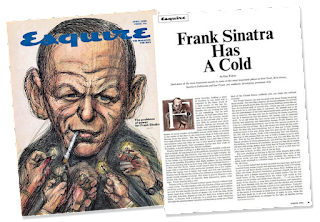