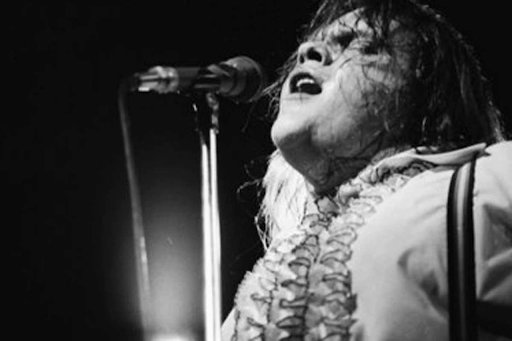 A huge loss recently was the singer Meat Loaf. His music was entwined with my adolescence. He was the soundtrack and the aspiration of my younger self.

The album Bat Out of Hell came out in 1977, an explosive debut for the rising star. I don’t know how many of the songs became big hits, but some of them seemed to be playing everywhere. The biggest hit, “Paradise by the Dashboard Lights” was the song of that summer, a summer when I had just begun to drive and was just aware of the power of songs on the radio. The cut is driving and frenetic, barely a moment of release in its churning base-driven frenzy. In Boston, the radios had substituted out local announcer, Dick Stockton, for the famous spoken part by Phil Rizzuto so the song had a local charm. And, oh yes, I was “barely seventeen” at the time. Meat Loaf was singing about me. He was singing to me. And even if I could only dream about being in a situation like the doomed protagonist in his epic song, I felt the passion and the heat every time the song played or each of the thousands of times I listened to it on the LP.

The album and the singer stayed with me as I grew up. In college I discovered Rocky Horror Picture Show and Meat Loaf’s soulful, murderous Eddie was a powerful and haunting presence (whatever did happen to Saturday night?). His later music was elegant and emotional. I noticed his touch as a producer in songs I loved like Bonny Tyler’s “Total Eclipse of the Heart” or Air Supply’s “Making Love Out of Nothing at All.” But it was the powerful virtuosity of his first songs that stayed with me.

His voice was a gauge by which I measured mine. In 1978-79, I was just coming to terms with possessing an expanding tenor voice, singing both classical and jazz in college. Intensely proud of my upper range, I wanted to be great. Meat Loaf’s voice was the reach just beyond my grasp, particularly on the ballad “Two Out of Three Ain’t Bad.”  I sang through the song an untold number of times, sometimes with the record, sometimes on my own, in showers, common rooms, bedrooms, archways, hallways. I must have been a real pest. It was the high notes I was aiming for, those magnificent soaring lines that Meat Loaf made so effortless and for me were a hash of squeal and falsetto. I never got there back then and, with time, tucked the song away into my file of memory.

The other day when Meat Loaf died, “Two Out of Three” popped into my head at once. With the miracle of Amazon Echo, Alexa was playing the song for me almost before I had asked her to. I was singing along, every word etched in the deep recess of my long-term memory. Sailing through chorus and verse, the mature tenor me stayed with Meat Loaf high note for high note. Then the bridge, at the stratospheric line about the “Coup de Ville hiding at the bottom of a Cracker Jack box,” miraculous to see, I was still in the game. But Meat Loaf had another register and the song transposes even higher, “never be able/ to give you something/ something that I just haven’t got.” Beaten again and at last. Well played, Meat Loaf. Again and finally, well played.

Ah well. What’s a heaven for?