In my old medical practice, I had no concept of what Networking was. Granted, I was never the kind of specialist who sat back in his office and waited for the patients to come. Rather, I was in the field, meeting the front-line doctors, teaching and learning from them at the same time. Similarly, I would spend time with the therapists, teachers, coaches and other first observers of childhood injury or disability. I wanted to be a part of the village that was raising the child; one of the components of a child-centric system. I guess I was networking all the time

My plunge into Networking (capital N) came from a desire to plug in after I had retired from clinical practice and moved cities, starting a second act career. I had no firm vision what that second act was, but I knew that to get to it I would need to meet people in the community. Also, the people in the networking gave me companionship in a city where I knew no one. So, I donned a suit and tie (a formality long since abandoned) and attended my first Network lunch uncertain as to what I would find. And the rest is history.

What did I find? By and large, my experience has been rich and interesting. I have found a range of professionals from thought-bursting entrepreneurs to down-level marketers. I have found pundits and sales folk. I have found people who have been in the business since the days of Noah and people whose ears still gleam from their mother’s first grooming. My networking partners have been glib, tongue-tied, eloquent, wholesome, ribald, funny, deadpan – the dictionary will run out of adjectives before I’m done describing them. But each and every one has had a story and innate integrity as to why they were there and what goals they carried.

I was surprised by how active Networking is. When starting, I kind of thought we would each stand up, say a few words about ourselves, sit down and pretend to listen and then collect business cards and referrals. The business cards turned out to be fact. When I first started, I had huge piles of the things, uncertain as to how to organize or stow them and what to do with them after the initial salvo. I still collect the occasional card, but now it is only for the people I know I will contact immediately. I don’t keep cards for rainy days, because inevitably on that rainy day, even if I found the card, I would not remember the gist of the intro or why that person had interested me in the first place.

The reality of Networking is that the ’30 second’ is the least involved part of a given session. Sure, I enjoy performing my little spiel. I like to change things up weekly, try to find a new topic or a new spin for each presentation. But even with that, at the meeting, the 30 second is a mere drip of time. The critical part of networking is turning my mind to envisioning how my interests and ideas mesh with each other member who stands to give their 30 second. I firmly believe that the contact point in networking is seldom the point of sale. It is not the product. It is the overlap of culture, philosophy, history, and interest that forges a synergy. To find those things, you must listen as loudly as you can, hear the nuance of the story, the context and subtext behind the flashy tagline. Networking is like people watching. You watch and hear the members go by and you make up a tale about each one. The difference is that at some point it is right to step in and become a part of the continuing story. 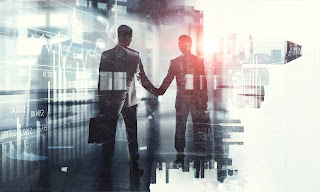