I enjoy cooking. I’m not a recipe type of cook. I get an idea in my head, summon the vision before me, and then armed with some basic culinary skills (I do know how to make a roux) and a cabinet full of spices, I produce the meal. Most often it works out with only the occasional misadventure. There are few meals that get hidden by the dreaded napkin as the cereal box gets pulled from the shelf. Some are admittedly works in progress. I have produced plates that were too monochrome; too yellow or too gray – easy fixes for the next time. I have mistaken chili powder for cinnamon and made some of the most interesting matzoh brie we’ve ever had. I have overdone the pepper, the sugar, the salt, the heat in my tinkering. But the overall ratio is good. About 80% of my experiments are ‘keepers’ with only a small few chalked up to experience.

So last night, when I tackled a fried cheese spinach salad with Mediterranean spices, I figured the worst that could happen was a high calorie novelty that didn’t make the grade. The noise and the excitement that accompanied the meal were an unwonted surprise. 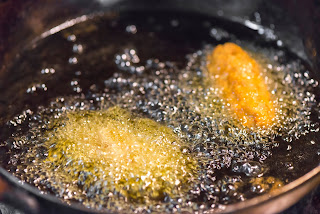 Let me set the record straight. I do not deep fry. I have never willingly slid a morsel of food into a scalding oil bath. Nor do I have experience with a shallow fry except for one successful batch of latkes many years ago. My frying experience is limited to sautéing or stir frying, or the occasional pan-fried steaks or chicken paillards.

But I know how to follow directions, as follows: The cheese was cut. The egg wash applied. The inch or so of vegetable oil was seething in its deep pan. In went the cheese pieces to a satisfying sizzle. I covered the pan with a screen to prevent spatter, all best practice. But when I lifted the screen mid-cook to turn the morsels, a large drop of hot grease leapt out onto my left foot. The cheese bits decided to glom together, hindering the turning process. Here am I hopping on my unsinged leg, trying to separate or at least flip a chain of ever crisping curds. I manage the flip and slip the screen back over the pan at which point grease on the screen ignites. A portion of the screen melts as acrid smoke rises. Smoke alarms awaken with their noisy bombastulating.

For what its worth, the final cooked cheese was quite tasty, those pieces that didn’t have mesh melted on top of them. The smoke alarms are comfortingly effective. The small spot of burn on my foot turned out insignificant. And we found out that the new puppy is remarkably chill in a crisis.

The fried cheese, and in fact my deep oil frying, have been relegated to the back shelf forever. I give the recipe two stars: tasty but not worth the pandemonium.