In the ancient world, the Olympics were a quadrennial time of truce. States laid down their weapons to allow the athletes to come together for open if not friendly competition. That’s the myth at least.

Now during two separate Olympic cycles the bully leader of Russia has waged war on neighboring Ukraine, in one case riding the surge of Nationalistic pride from hosting (Sochi 2014) and this year banking on the distraction of the spotlight on a more powerful enemy who may have be in accord with Russian ambitions. Such naked aggression would seem to be against everything that the Olympic movement stands for.

Except we haven’t had an Olympics free of rabid nationalistic fervor in, well, forever. For every feelgood story of a Russian and an American forming a lifelong friendship, there is another of blood in the water polo pool. And even if athletes are becoming citizens of the world, playing more for their sponsors than for their countries, the fans and observers are ever obsessed with owning the national rival, of using the competition as a surrogate for war.

There is nothing wrong with patriotic pride. I enjoy the images of a brilliant athlete basking in the glory of their national anthem with gold strung around their victorious neck. Does it make me proud to be American? I guess so, if only with the vicarious pleasure that I watch any sporting event. If a team or individual for which I am rooting wins, I enjoy their moment. But I cannot see how the brilliance of an American Olympian is any reflection either on me or on our society.

Neither then are the athletes the carriers of a nation’s glory. They are engaging, beautiful individuals who had the fortune of being born in one country (or in some cases to citizens of a country). They do not of necessity embody the beliefs or the politics or the foibles of their nation. We call out for them to support this or that which aligns with our own beliefs, but those are our beliefs, not even our country’s, and they may have their own.

In a world where everything is politicized beyond reason, can’t we set aside the jingoism and simply enjoy the pageantry of glorious competition? It was a beautiful myth in the ancient world. It is a beautiful myth now. 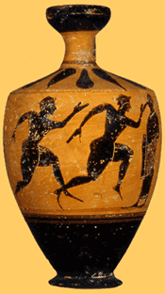