“The blessed damozel leaned out
From the gold bar of Heaven;
Her eyes were deeper than the depth
Of waters stilled at even
She had three lilies in her hand
And the stars in her hair were seven.”

It is worth unpacking the neo-pre-Raphaelites as a poetic and artistic movement. Their artwork is lush and dense as is the imagery and language in their poems. The soft edges and the somewhat blurred realism of both verse and image make the poems hard to work through. You must immerse yourself in the pre-Raphaelites as they did in their entire lifestyle. The most striking aspect of this (and all Dante Rossetti poems) is the dichotomy of a truly modern reference point (no classical or even Renaissance poem would proceed from the woman subject’s point of view) within its self-consciously archaic ballad framework. 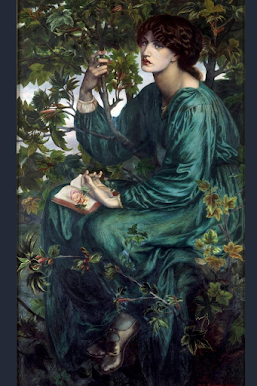