From the Belly of the Press

I have lived through a passel of Presidential elections.  Since I first became old enough to realize that such things as issues and platforms existed, I have read the editorials and endorsements in as many newspapers as I could find.  As a hobby, I have reached back into the press morgues to find what the newspapers said about presidential candidates who were merely historical names to me.  It has been an ever-replenishing source of astonishment and amusement.
To say that this year’s election is remarkable is to engage in the broadest of understatements.  The politics on display are not in the purview of a blog like this.  But with regards to endorsements, I will observe the amazing one-sidedness – only one of the candidates is being endorsed, even where it flies in the face of tradition and normal political alignments.
Even more striking this year’s crop of editorial stands is the number of dis-endorsements that have been published again the very lopsided numbers.   It is one thing for a hitherto conservative newspaper to endorse a Democrat.  It is quite another for the same paper to run a separate piece arguing why the so-called conservative candidate is in their eyes unacceptable.  One can argue that negative arguments are never the most effective, but when a publisher and editorial board start with the stance that one candidate is simply unqualified it makes a strong and remarkable statement. 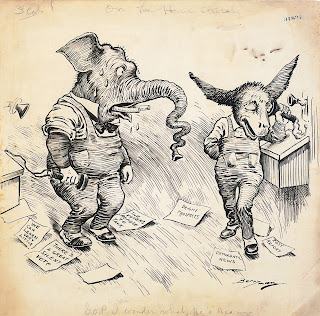 A typical argument from the aggrieved supporters of the maligned candidate is that no one cares what the newspapers say anymore.  Newspapers are losing readership in this country at alarming rates.  Fewer people, according to polls (mostly online), are using newspapers as their primary news source.  Circulation is shrinking, as is the size of the papers themselves both in terms of page size and number.  Many local papers are closing shop, or selling to national interests while maintaining their local editorial boards.  Some have abandoned unique editorials altogether.  So, the argument goes, if no one is reading the newspapers, who cares whom they endorse?
If a tree falls in the forest and there is no one around to hear it, is it Obama’s fault? (There’s that nasty politics again.)  But the real question is, does an editorial lose its authority because fewer people are reading it?  It may lose its effect.  I remember my grandmother waiting to see who the Boston Record American endorsed to decide where to cast her vote and the wild arguments between her and my New York Times devoted mother.  Now it is probable that fewer people are informing their decisions on what a publisher says to them.
But that does not remove the validity of the editorial statement.  In the best circumstances, editorials and endorsements are carefully thought out and explored decisions.  At a recent luncheon, the Associate Editor of the Dallas Morning News described the process in detail:  ten editorial board members wearing their board hats (not personal opinion) hash out what they want an editorial to say based on their interpretation of the stories and the prevailing sentiments of their readers and community.  It is a painstaking and thoughtful process, or it should be.  Even in those areas where an editorial is the written from the personal beliefs of a single editor, it still reflects a consideration of what that individual thinks the readers believe.  Newspapers are not blogs.  They have community investment and speak, in however flawed a manner, with a public voice.
So this year’s flock of endorsements and dis-endorsements do mean something.  They mean that on consideration of the values and the mores of the community, a trained board of writers has determined what the community believes – not the only belief to be sure, but that which reflects the consensus.  In this setting, the overwhelming support of one candidate and the disproportionate lack of support for the other are all the more striking.