Get Me to the Greek (Festival)

The Greek stones may not actually speak, but the food does.
Yesterday, we went to the 60th annual Dallas Greek Festival at Holy Trinity Orthodox Church in the North part of the city.  The day was gray and gloomy, hinting at thunderstorms which never quite arrived.  But we are steadfast aficionados of Greek Festivals from many years back, so it would take more than impending rain to keep us away.
Despite the weather (or threat of it) the Fair was happy and busy.  The church is a large stately edifice with a matching parish house and a broad campus.  The friendly grounds were festooned with festival tents for the occasion which served as ticket and coupon booths, drink and dessert dispensaries and a massive and impressive food court.  The food court is the heart of all these festivals; that which attracts folks year to year even if they are Christopoulos’s or Levines .  More on the food later. 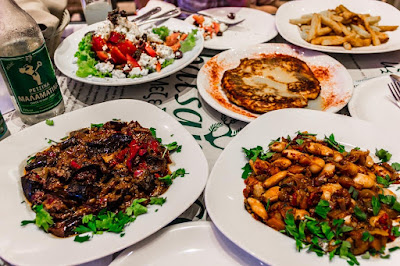 The Fair also boasted a small but thriving vendor’s area (where else would you buy your Pysanki eggs?) and cooking and music demonstrations.  To me, the church bookstore was by far the most intriguing retail spot.  We found it well stocked with incense and icons of all shapes and practical size (including a small palm sized diptych of Jesus and Mary which we added to our collection).  In addition, the shelves were lined with thought provoking books on liturgy, history, epistemology and all aspects of the life of the Greek Church.  One of the things I admire most about the Orthodox religions (including Roman Catholicism) is the desire to explore and understand their devotions.
A crowning part of the day was a visit to the church itself.  Like many Orthodox Church buildings, Holy Trinity is shaped like a Roman basilica with a large narthex, squat and broad nave and aisles and a bold screened apse and altar crowned with a gilded dome.  The airy clerestory as well as the bright yellow paint gave the building a welcoming air which was countered by the haunting and solemn paintings of saints and priests, rendered in a Byzantine style.  These works were so strong and deft that they had a serene antiquity that belied their recent vintage.  The same sure hand was seen in the elegant and charming icons on sale in the store.
One small disappointment was the earnest choir toiling through their demonstration hymns on high in the choir loft.  It is surely no one’s fault, but an Orthodox choir without the booming grounding of deep basses is like a Kourabiedes without powdered sugar.   It is recognizable as a cookie, but not the kind it was meant to be.
Ah, and the food.  In full disclosure, I am mad for Greek food, haven’t never met a souvlaki that didn’t enrapture me.  In further candidness, I was not my usual trencherman self.  We chose lighter fare, but feasted nevertheless on spanakopita, pastitsio and salad.  The foods were fresh and genuine, down to the flair of the cumin in the noodles.   Other dishes on sale were grilled chicken, fried feta balls, the obligatory French fries, souvlaki, and crisp looking dolmanthes.  One thing missing that the festival we used to visit in Raleigh boasted was lamb kleftiko, which I love but always thought was ungainly for mass consumption.  Instead, the Dallas version featured lamb sliders with generous portions of juicy meat on small buns, probably a better approach and certain to leave fewer shank bones to clog the trash bins.
Greek families sang, Greek children danced, Greek deacons flapped about.  The outstanding feeling of this Festival was one of shared community, not just local but with all Greek Festivals everywhere.  I was transported not only to Raleigh but also to the heady days at the Greek Orthodox Cathedral in Brookline, MA where we were young.  For brief moments, even though we live in a strange city and we are not Greek, we were home.