I missed a milestone.

I could not bring myself to write about the hundredth day of the shutdown in part because I have a distaste for arbitrary celebrations. My hundredth day may have been a New Yorker’s 150th or a Parisian’s two hundred somethingth, rendering my declaration meaningless.

The main reason though was shear frustration. After a hundred days, the situation in Texas (and in the USA as a whole) is worse than it was when we started. Our governor may be finally speaking out in forceful terms, but he is still being undermined by his own Lt. Gov and Secretary of State. What little leadership we have seen, both in this state and from the Executive branch of the Federal Government has been muddled and tentative. Why commemorate a hundredth day when there is no reason to think things will improve by the second or third hundredth?

I celebrated the Fourth of July by watching Hamilton – for once a product that is even better than its hype. The play is a work of genius with stellar performances and a powerful, frenetic strength that is constantly challenging. Where is it written that the theater is meant to be easy? I urge everyone to find a way to watch it.

For those of you who have spent the last five years under a rock, Hamilton is an urban musical biography of one of the towering figures of US history. But it is really a vignette of the times and the brilliance that went into the formation of our country. Its motive force is the juxtaposition of Hamilton and his nemesis Aaron Burr – Burr a man so cautious that he achieves nothing and Hamilton so rash that he almost destroys everything he has achieved. In the end, history is kinder to Hamilton than Burr, who is now barely remembered except for the one shocking act of (spoiler) killing his rival.

The most striking thing about the play, and in fact the historical period it depicts, is the electric energy that crackles throughout. The world was stripped down and turned on its head and American leaders invented an entire country from whole cloth, taking fewer than fifteen years to do so. The production captures this energy in fierce and rapid-fire song and in the constant swirl of action in the background. It can be easy to forget how much effort was involved in the American experiment, of thought and documentation and debate. Hamilton, the play, is an active reminder.

For Hamilton, the man, and his colleagues, History was there for the taking and they grabbed it without hesitation. They recognized the task ahead and flung themselves into work with wit, brilliance and wisdom. Their solutions were far from perfect but created a framework for growth. They strove and accomplished.

Where are today’s Hamiltons or Washingtons? Or even today’s Aaron Burrs? Where are the energy, the wit and the courage to take history by the scruff of the neck and make a move? All these have been lost in the cowering fear of voting bases and approval ratings. 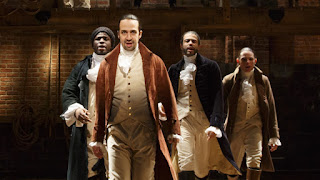