My father, Henry Mankin MD, would have been 92 today. He was a wise and powerful leader, a larger-than-life hero who never entered a room without commanding it. He was also funny, snarky and sentimental. I miss him all the time.

I have often wondered, since the early days of the pandemic, what he would have said and done in the situation. Not the enfeebled and docile Henry of his final years – it is a mercy that he didn’t live to experience this. But the powerful Young Turk Henry in his pomp. What would his reaction have been?

It is not as far-fetched a question as it sounds, because Henry had lived through his own pandemic. He was born in 1928, raised in Pittsburgh PA in the 30s and 40s and graduated from Pitt Medical School in 1953. Students of history (as we should all be) will recognize Pittsburgh 1953 as one of hose epicenters of earth-change. It was the very site where Dr. Jonas Salk developed and first produced the vaccine which defeated polio. In fact, my father’s medical school class was the first wave of humans to receive the new inoculation.

Polio is all but forgotten now, but it was a scourge. Communities were decimated by its viral reach. Public buildings and parks were shuttered and abandoned. Families were cast out of society for having the weakness to allow the virus to affect them. The disease returned every year, unmitigated in its devastation. That is until the brilliant work of scientists brought it to its heels.

Henry in his prime would have looked at our current condition as another of life’s hurdles. He would have been spirited and energized by his firm belief that there was nothing, nothing, that science and rationality could not overcome. He would not have suffered fools to raise conspiratorial doubts. Mostly, he would have been there on the front lines, exhorting his followers to provide care and support, challenging the scientists to stick to their task, sticking out his arm to be in the first wave of the treated.

Henry had a voice that would be heard. He testified before congress on numerous occasions advocating for research and rational healthcare. He would have been on television and radio and newspaper articles.  But mostly he would have been in the ears of everyone who could hear his stentorian tones. “Keep working! We’ve got this!” Where are the voices like that now? 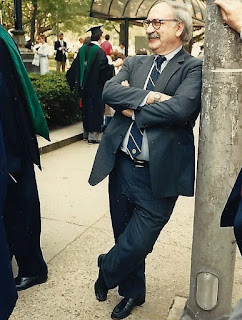