Another holiday falls to the pandemic. Halloween 2020 is relegated because imaginary terrors cannot measure up to the real anxieties of disease and politics.

I’m sorry for the youngsters who will miss a Halloween. Hopefully, there is just this one lost, for you get so few magical days in your life before the humdrum of adulthood takes over. Halloween is one of those holidays where youth is not necessary to believe, but there is something about the innocence of those early celebrations that instill the strongest of memories.

I was raised in part in Scarsdale NY, a fashionable but not overly stylish bedroom community of New York City. Even from age six to twelve, I could tell that Scarsdale had little of note to recommend it. Except that it may have been the best Halloween town in which I have ever dwelt. Small enough to roam through, at that time quiet enough that traffic was not an issue and by and large safe enough to let children free on this Devil’s night of October 31st, the village was formative in my love of the holiday. It had small patches of woods (which I’m sure were just a few trees but seemed liked haunted forests to my impressionable young self). There was a pond around the library where a dreaded and eldritch snapping turtle of legend lived. There were creepy lanes and colonial houses that might have sheltered witches.

None of those things ever happened, as tired and frozen legs gave in to the lateness of the hour. Our pack would dwindle, members slipping off home without announcing their shame to the rest of the group. Finally, it would be two or three of us huddling together in a night swept by ghastly winds, no stars daring to glow in the sky where menacing clouds or spirits would cover the moon. We would stomp along in brave exhaustion, silent as the tomb lest we attract the attention of some hideous creature of the night. We would walk in the middle of the road so nothing could grab us from the bushes.

At the top of the road a small group would appear and approach, an inexorable force. Do we run or face them? Our path home lay ahead and the three or four of us were too tired for the long loop around. We trudged forward into dreaded unknown. Monsters? Highwaymen? High schoolers? Each prospect more dreadful than the last. Finally, in sullen shadow, we would reach hailing or grabbing distance. Fight or flight frenzied our minds.

A call, a voice, a greeting. It was my brother David’s pack, equally worn and equally scared. A laugh, a playful threat so that the older kids would not have to admit their own secret horror. A passing of foragers in the haunted night, then home to count the booty and fall asleep to nightmares of happy singing ghosts and werewolves wagging their furry tails.

HAPPY HALLOWEEN to all! 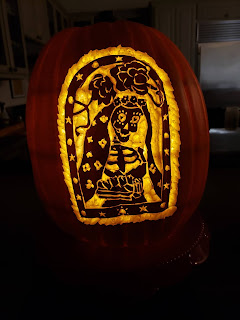