In my youth, my family loved bookstores. No outing was complete without an hour or more browsing through the luxuriant shelves. We would fan out to our perspective pleasures: David would head to the Fantasy section or the Classics, Allison would beeline to SciFi, my mother would peruse the bestsellers and pick out five or six titles that would serve both her and my father. All of them were avid and omnivorous readers. For me, it was sampling, unsure of my reading destiny.

My father, by and large, would stand in the front of the store, benignly smoking his pipe (it was a different time) and content in the happiness of his brood and the knowledge that my mother would provide him well with reading material.

On rare occasions though, my dad would walk into the store, perhaps moved by my aimlessness, take a volume off the shelves and hand it to me with a definitive, “Read this!” Which I always did, grateful for the guidance and the personal contact.

One book that he gave me was a poem called “archy and mehitabel” by Don Marquis.  Now largely overlooked, it relates the musings of a cockroach named Archy who lives at a newspaper office and communicates with Marquis through typewritten notes. Because the roach hits the keys by jumping on them one at a time, he cannot capitalize and rarely wastes his time and energy on punctuation. The whole poem cycle is a flow of free verse and association that talks in a hard-bitten and world-weary voice about life and death and disappointment.

Archy’s cynicism is balanced by the other title character, Mehitabel, a cat who claims to be reincarnated from Cleopatra. She recalls glorious and pampered times in palaces surrounded by servants and feasts while all the while recounting her dingy and sordid current existence surviving in alleys and garbage cans. Tragic as she is, she is never beaten down. She is imbued with hard worn wisdom and fatalism. Life is difficult, bleak and chancy, but it is life and there will always be opportunities to live.

Mehitabel’s favorite interjection is “wottheehell” which rings like a refrain through her wonderful songs. This remarkable neologism captures a sense of both disbelieve and of perseverance. It reflects the shock that bad things happen (What is going on here?). But it also contains a cosmic shrug (Who cares if they happen?). It is both vulnerable and defiant.

By the time I graduated college, I had read “archy and mehitabel” dozens of times (much like father had in his youth) and then set it aside. I have only recently discovered it afresh, during a time of turmoil and uncertainty. I find it comforting both as an old friend and a new source of inspiration.

Not quite as cynical as Archy, I do not have the brashness of Mehitabel, able to toss away privation with the arrogance that I have earned and deserve better things. But wouldn’t it be nice to have that kind of courage and the certainty to shrug and dance, lilting in time with your own sense of assurance and immortality. “there’s a dance in the old dame yet” says Mehitabel the cat “so wotthehell wotthehell” 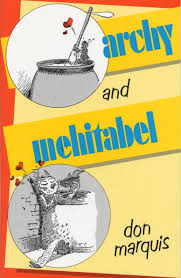