The problem with doing anything alphabetically is that you must run into that vestigial menace, the letter X.

There are precious few words that start with the benighted letter. Even my trusty Shorter Oxford Dictionary only devotes three pages. The word ‘xenophobia’ may be timely but in my mind, it is horribly pretentious. And even I can’t spin a useful yarn about the many variations of the prefix “xantho” (meaning yellow).

Instead, I’m going to write about Sesame Street. Bear with me. There is a connection.

Although I am slightly old to be a Sesame Street child, I will confess to watching it with religious fascination when I was younger. Even at nine or ten-years, there was something comfortable about the familiar rote lessons and the easy puzzles (I could tell “which of these things is not like the others” with the best of them). Beyond that, there was the sense of warmth and family that the show projected, a sort of cradling in a safe environment that even a jaded peri-teen could relish.

I discovered the show around the time of a turbulent family move from New York to Boston. In my new turf, I didn’t know the streets or the shops or even the television stations. I had no friends at first. But there, on an unfamiliar channel but just as cheerful and welcoming as ever, were my old friends – monster, chimp and human. I could count (literally) on the corny rhymes, the broad puns and the wholesome songs. I could revel in the fact that everyone who arrived on the street was always part of the neighborhood.

There are many, many vignettes from the old shows that have stuck with me and many of them are now my canonical language. When in the operating room I would count spinal levels ala the Count (“One spinal level, two spinal levels, hah ha ha!”) every nurse who was a mother would chuckle along with me. I could joke about “people in the neighborhood” or sing a song that was “simple to last the whole day long” and people would laugh or sing with me.

One of my favorite moments, buried deep in my early watching days, would feature on days when the show was brought to us by the letter X. I would wait in eager anticipation for the furry green sleuth Sherlock Hemlock, deerstalker on head and magnifying glass in hand, to make his dramatic appearance. “Egads!” he would sing with only somewhat comic seriousness. “X marks the spot/ X means there’s danger” and so forth.

I knew my alphabet well before I watched Sesame Street. But I’m not sure I loved it quite so dearly. 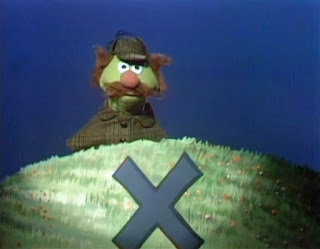