My second alphabetical day and already I am in a quandary. I am feeling Beneficent, having spent much of Sunday watching a livestream Rotary International telethon highlighting that august organization’s efforts during the pandemic. It is easy to get caught up in the sweep of public service.

That’s the respectable word for the day. Another word that I really have my heart set on using – possibly the very reason I decided on doing this alphabetical puzzle – is Bodacious.

Despite some unfair connotations, Bodacious (or more accurately Boldacious) is merely a compound of ‘bold’ and ‘audacious’. It means brazen or insolent.

Those who know me will attest, I don’t have an insolent bone in my body, but I think after weeks of social distancing we have all earned the right be a little brazen. We are all given license to yell back at the newspaper or the television and say, “Enough of platitudes. Give me facts!” Or even against nature and the virus, “Enough already. You’ve proven your point. Now let us get back to life!”

None of which is why I wanted to include the word. As with all things, there is context.

Growing up, my siblings and I were inveterate viewers of cartoons. Being the perfect age range, I was more grounded in the regular Saturday morning fare, Scooby-Doo and the like. But my sister and brother, weaned on Howdy Doody and Captain Kangaroo were more drawn to the classics, those shorts that were produced for theatrical consumption as openers to a day at the movies and then migrated to television as a ready source of content. They loved Popeye and Tom and Jerry, as well as the strange MGM melodic shorts such as the one in which Richard Strauss comes alive to fight off monsters on the Danube.

An overlap point for David and me was the series of poorly animated vehicles which featured famous comic characters. One of our favorites was Snuffy Smith, the shiftless Hillbilly moonshiner. Originally a sidekick in a strip called Barney Google, Snuffy rapidly outgrew his host. I’m not sure you could get away with creating a character like this now, with his laziness and petty criminality, but by the time David and I met him, Snuffy was an undisputed star. His strip is still in circulation.

Most of the plots of these seven-minute extravaganzas are repetitive and forgettable (except perhaps the classic Rip Van Winkle episode). It is the theme song that resonates in my head forever. “Oh, oh, oh, great balls of fire, I’m Bodacious!”

Fifty years later, I look back and cringe at the time wasted watching that piffle. Yet almost every time my brother would call me throughout the rest of his life, he would start the conversation, “Well, kid, are you bodacious?”

Great Balls of Fire, Dave, I’m trying to be. 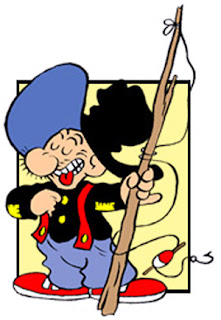