HAPPY MOTHER’S DAY, whatever island you are on.
Mother’s Day is the ultimate greeting card holiday, created at the start of the twentieth century, not so coincidentally at the same time as Joyce Hall opened his Hallmark business. Despite this, even I have trouble generating any cynicism for an occasion that allows offspring to focus on the formative force in their lives.
In yesteryears, when my mom was still with us, the day would be celebrated with a long phone call in the morning. There was nothing unique about that – Sunday morning was always the province of my mother. She made sure to instill the habit of calling her by calling us – early. A few phone calls at 7 AM on Sunday to a college dorm is a sure way to elicit the promise of a defensive phone call at 9 or 10, if only to protect the college kid from the opprobrium of his roommates.
The phone call on Mother’s Day always seemed special. Maybe it was the moment of concern until Mom confirmed that she had indeed received the card that we had sent. Maybe it was the fact that, for once, my mother would put her diffidence aside and let me (and my son eventually) heap gratitude and appreciation on her. It was a rare chance for her to bask in good thoughts and, if I guided her properly, to reminisce in uncharacteristically happy terms about her own mother.
When we lived in the same city, Mother’s Day would be a day for dining out, although even in the early part of the 90s when we all were in Boston together, getting into a restaurant was difficult. My parents were upscale people, so often we would have brunch at the Ritz or the Four Seasons, and for a while at least that gave some shelter from the mobs. But even there we would encounter long waits for our reservations, harried and hurried waitstaff and a general urgency to get us done that took away some of the pleasure of the day. We had one surly brat of a waiter who, when asked about the tardiness of our salad course snapped, “You’re putting me in a lose-lose situation. I don’t know what you want from me.” My dad simply said, “Our salads?” and the waiter fired us as a table to the chagrin and the abject apologies of the maître d’.
But my mom never seemed to care about the bustle. Don’t misunderstand – she complained with the best of them. But at the end of the meal, no matter how fraught it might have been, she would look at us and sigh, “Best Mother’s Day ever.”
To all families and especially all mothers out there, may you show the same resilience as my mom. This is certainly the weirdest of Mother’s Day since old Joyce Hall started printing flowery greeting cards. But if you can spend even a moment in your loved one’s thoughts, then surely it is a wonderful day.
Here’s to you, Carole Mankin! 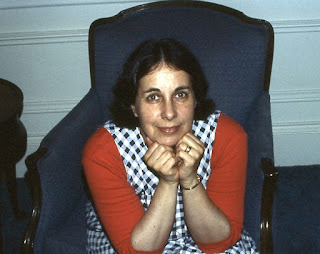