There have been many, many deaths attributable to the coronavirus and I give honor to every single soul that has passed. Some deaths though touch me more deeply.

Roy Horn, a performer in the sparkling Las Vegas act Siegfried and Roy, died this weekend of complications from the virus. He had been in fragile health for many years since an onstage accident leading to a severe traumatic stroke in 2003.

For those younger folks in my readership, Siegfried and Roy’s act was unique in a town that had everything. It featured a combination of magic and animals, specifically an array of marvelous white lions and tigers in a production that was at once over-the-top and elegant. The best part was that although the animals featured in the act, they were never humiliated or belittled. It was as if it was their act and the humans merely did their bidding to showcase their magnificence.

Outside of the stage, the pair, who lived together for more than fifty years although never explicitly discussed their personal relationship, by all appearances maintained the same respect and deference to the mighty creatures who shared their lives. The estate was built around beautiful environs for the cats to prowl – no cages for these beauties. Cats and humans seemed to dwell in peaceful coexistence.

Even at the very time of the accident that nearly cost him his life, Roy insisted that the tiger who had attacked him be spared, relying on the charming fiction that the animal was protecting him but didn’t know its own strength. That animal was retired to the estate and lived out its days in peace.

I don’t know why I am so moved by this death, unless it is because of my love for great cats and for Roy’s remarkable poise in that fateful moment so long ago. Perhaps it is the stark irony that a man who could tame and love some of the world’s largest and most powerful animals should be felled by a submicroscopic one. Everything about this virus seems to arise from Penny Dreadful irony.

I can’t help wondering if, in his final moments, Roy Horn forgave the tiny beings that killed him. Did he believe that the viruses were just doing what they do? Or did he finally lash out at a living creature and at the unfairness of his fate. 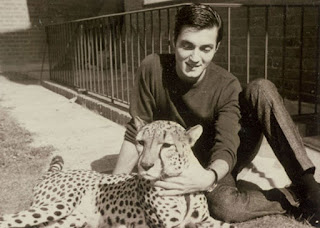