I almost always publish my Notes at the first light of day, but it’s never a bad time to tell a Ghost story.

Growing up, my brother, sister and I had our fair share of spectral encounters, mostly during the time we lived in the house in Scarsdale NY. There is nothing particularly eerie about Scarsdale except perhaps its age, with houses dating back to Colonial times. Ours was not one of them. It was a large and eccentric stucco from the 1930s and it was jampacked full of ghosts.

My sister told us when we moved in about a young man who had died there. She even knew his name, although in retrospect David and I should have been skeptical about how. It may not have been the deceased lad’s spirit harrowing us, but the wing in which David and I dwelled had more than its share of noises, cold spots and creaking doors. We were high above the garage and the kitchen (where a refrigerator housed a phantom head and the pantry a box of graham crackers that no one had bought, and no one could ever grab). The noises may well have been wind rattling through drafty spaces. But no explanation could account for the faces in the window when David and I were out back playing, or the elderly woman who appeared behind me one small morning as I sat at the window seat reading comic books.

One evening, my sister, our putative babysitter, went to a play at the High School. It was just down the street and David was at least thirteen. And she did ask us to join her. But we had battles to fight and monster movies to watch. We let her go.

Not long after, the noise started, a moaning from the basement. We were far too scared not to explore, baseball bats (the universal weapons of boys our age) at the ready.

Our basement was vast, too large for lighting even in daytime. It was always creepy, with its mysterious electric football game that turned itself on even when unplugged and its miles of disused toy trains that my father swore were his as a boy. By night, in the piercing darkness, the cellar was hushed and lurking. But we sallied forth, too brave to breathe. Our plan was to stop at each of the thousand doors in the cavernous depths and then, at a count, run screaming in with bats flailing. We never encountered anything, until the last room, a combined furnace and laundry room that neither of us had ever had the guts to step into. It had one hanging light, square in its center, and no windows to even soften the inky depths.

At the door, we heard the steady hum of the furnace. In our breathless concentration, we could even hear the whirring of the gas and water meters counting the passage of utilitarian time. Behind that, came another noise – so low that it barely rose above the heartbeats in our ears – a deep and solemn moan in the heart of the woeful darkness.

The play at the high school was excellent. Allison had the good graces not to ask us why we followed her home so closely or why every light was burning in the house when we arrived. 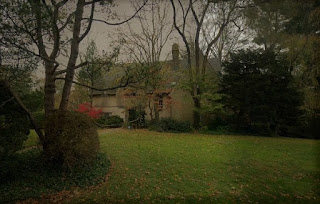