Waking up on my island and wondering whether to shave, my essay today is about Hirsuteness.

The word ‘hirsute’, generally accepted as meaning ‘hairy’, has nothing in its origins to do with hair. It means ‘spiky’ or ‘bristly’ and is probably more closely related to the word ‘horror’ than to the word ‘hair’ (as in ‘hair standing on end’ fright). I have always felt it was onomatopoetic – the sound that you hear when you stroke your scraggly chin.

It is a strong and strange indictment of our times that I need to make a political disclaimer before tackling this subject. Who would have dreamed two months ago as we entered our bewildering enisling that even haircuts would become partisan? Discussion of this cultural phenomenon is best left to others than me.

The length and shape of our hair is an important aspect of our personal image. Hair is the first feature many notice, visible as it is in a crowd or from a distance. Even in a time of Zoom meetings, it is hard to hide, although hats, scarves and even fright wigs have all been deployed. No one will blame us for being a little shaggy, and yet the shagginess is an omnipresent indicator of what we are lacking as well as nagging reminder of our collective vanity.

The hair on the head is one thing, barbers being shuttered. By the way, this is not the first time such an embargo has occurred (despite the protestations of the vocal crowds). Tonsorial workers have always been among the most policed and controlled artisans, largely because of the concern of epidemics of head lice, scabies and even life-threatening diseases like TB or bubonic plague. Barbers and stylists know that they work at the discretion of the local Boards of Health – it’s in their licensure.

A more mystifying process is the ubiquitous plague beard. There is no shortage of razors during the pandemic, nor do most people rely on outside forces to raze their faces. And yet everyone has sprouted “facial fungus” as the Saint often called it. I tried my own only to find out that: 1) I cannot grow a full beard and 2) beards are itchy for an unpleasant amount of time.

My son shifts from hirsute to cleanshaven with alarming rapidity.  A dear friend of mine has a magnificent mandibular mane to go with the illustrious mustache that he already wore. My own effort went from five o’clock shadow to mange over a few days. My sorry attempt is long gone, and I have noticed many others who have finally given up the whiskered ghost.

Why did we grow them in the first place? Was it laziness? Was it rebellion against the abrupt dismissal of the world’s normal order? Was it superstition ala the NHL and their playoff beards? Perhaps it has been an attempt to identify with other beasts, like bears, in our hibernation?

Many of the things that we are now seeing during the shutdown are here to stay. Zoom meetings will never leave us. Work from home has become acceptable alternative. Telemedicine as well.  Perhaps we are seeing the re-advent of the Age of the Bushy Beard. Or possibly, like the shaggy mop that many of us are sporting on our heads, all this will vanish when the doors and the barbers reopen soon. 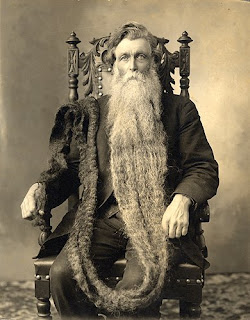