Some of the things missing from my island were not there at all, missing for many years. Isolation brings their long-term absence into sharp relief.

There is a movie called “The Sterile Cuckoo” (1969) which I have always had mixed feelings for. Liza Minelli is extraordinary but the script alternates from zany to melodramatic too sharply for my tastes. Maybe because the nine-year-old me wanted nothing to do with it, the film has never made into my inner circle.

The theme song though is one of my favorites. “Come Saturday Morning,” written by Fred Karlin and Dory Previn and recorded by The Sandpipers, is light folk rock at best, approaching pop. The hook may be catchy, but it is the lyrics that capture me: “Come Saturday Morning/ I’m going away with my friends/ We’ll Saturday spend ‘til the end of the day.”

To most, this song is about romance and the excitement of young love. To me, the song evokes the carefree time of waking up late, noshing sugary cereal and spending hours in the company of cartoon friends on the television. Grown ups may be running around in parks and falling in love. The happy and hearty boy that I was immersed himself in the freedom of wasted time.

The characters that paraded (mindlessly, I must admit) across my television were indeed my friends. I looked forward to Scooby Doo and Bugs Bunny. I cheered for Penelope Pitstop and chuckled along with Muttley and the other Wacky Racers. I even relished the less-than-classic animation of shows like Frankie, Jr or the Way Way Outs or Spider-Man. Nothing cheered me more than the advertisements in TV Guide which boasted of the New Fall Line-up of Saturday Morning cartoons, as I welcomed back old favorites and dreamed about what delights the new products might hold.

I wouldn’t dare watch any of these shows again, even if I could find them. I have treated myself to listening to the themes from shows like Milton the Monster or Kimba the White Lion (which I still know by heart), but the thought of watching an episode or two stops me in my tracks. Either I will recognize that they are pablum (as the rational part of my brain knew even then) or the heartbreak of nostalgia will be too crushing.

One thing that the cartoons represented was consistency. The titles would change, but every Saturday the feeling and the sounds and colors would always be there. And they were all mine. My mother was tolerant enough to let me have the television to myself. My brother and sister had no interest. These were my moments, my friends, my world if only for a couple of hours. How lovely would it be to have that certainty now.

The song finishes, “And then we’ll move on/ But we will remember/ Long after Saturday’s gone.” 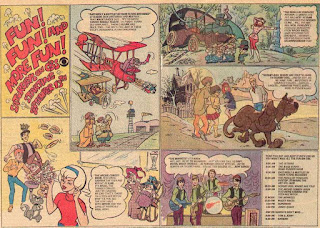