My calendar image for this month is Japan. It is an insipid piece of artwork even for a travel poster – two women in traditional dress crowded into the foreground which overwhelms the autumnal colors of maple leaves and misty mountains in the background.

Nevertheless, it spurs my imagination (see yesterday’s Note) to dream of travel and cool fresh air in a place I have never been.

The redolence of absence also hangs around the poster. Although I had no plans to travel there, Japan would have played prominently in our awareness this summer, as Tokyo was to host the Olympics. We would already have been following the final stages of qualifying for sports that we only care about every four years. We would have been arguing with authority about whether (then) Bruce Jenner or Daley Thompson was the best decathlete of all time (ignoring of course pre-or early television greats like Jim Thorpe, Bob Mathias or Rafer Johnson), all the while struggling to name all ten components of the event. Self-taught experts would be commenting on whether the race walker had really broken into a run or the Greco-Roman wrestler had illegally used his legs.

Now, we wait for 2021, we hope, as the calendar of international sports falls off its established treadmill.

The last games in Tokyo were held in 1964. Japan had originally been slated to host in 1940 but were stripped of their rights for their military aggression. Even in 1964, the War must have seemed close for the hosts and their guests. Some athletes from Asia refused to attend in protest, and the lighter of the flame, Yoshinori Sakai, was a 19-year-old runner chosen because he had been born in Hiroshima on the day of the nuclear bombing.  The competition itself is probably best remembered for the heroics of Abebe Bikila, the Ethiopian who was the first person to win sequential Olympic Marathons and of Joe Frazier who followed Cassius Clay’s 1960 heavyweight boxing gold in Rome with one of his own. Willi Holdorf of Germany won the decathlon. The games are also memorialized in the engaging Cary Grant comedy “Walk Don’t Run” (1966).

The odd legacy of these future Tokyo games has yet to play out. By report, the Tokyo ’20 organizers have decided that rebranding to ‘Tokyo ’21’ will be too difficult and fraught, so all the signage will remind us of the disjointed timing of the games. Coaches and athletes are concerned about the effect of the long layoff from meaningful training due to the shelter-in-place orders as well as the effect of the extra year. Qualifiers in most sports will be allowed to maintain their positions on the teams but may be out of sync or even past their prime. Internal standards and records will be difficult to compare. The whole process will have a huge asterisk assigned to it.  None of this considers the complex financial process that will be involved in the dislocation.

In ancient times, by legend if not always in fact, the world stopped for the quadrennial festival. Wars are said to have been paused. Political events were laid aside until the champions had been crowned. Wouldn’t it be nice if the virus could call a truce for two months and allow us the small measure of regularity that an on-time Olympics would bring? 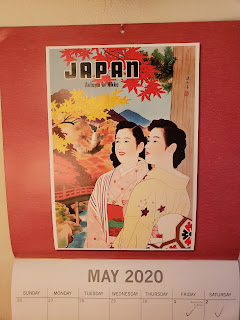