An unforeseen and unfortunate circumstance of writing alphabetically is when you have already used all the good words as themes for prior notes. I have already written about Pets and Puzzles. I have no taste for Polemic or Partisanship. Pandemonium and Pandemic seen somehow too panicky.

During a walk around my block, er, island, I had the inspiration I needed. I will write about Pac-Man.

Please understand, I have no great affinity for the arcade game. Aside from a few unsuccessful dabbles in my youth, I avoided the arcade games of this sort as unprofitable wastes of quarters. I was always much more of a pinball guy. Pinball had a mechanical reality that made you feel you were a part of the game. Adding the occasional machine shimmy and the hand and wrist movement to keep flippers flying and the ball on track, it almost felt like dancing. I confess to wasting far too many hours over pinball machines but do have the distinction of being told by college radio disc jockey Stompin’ Zemo (yes, THE Stompin’ Zemo himself) that I had “righteous flipper action.”

Walking outside in a world of social distancing (even in a world where half of the citizens have convinced themselves the crisis is over) has a dislocated feeling of unreality that reminds of the arcade games. The world is real, the trees are lush and the flowers ripe, but the people you pass are featureless – a combination of masks and averted gazes, as if eye-contact were prohibited in the municipal by-laws.

The overlap between game and reality becomes intense when I spy another walker on an otherwise deserted stretch. There are so many calculations and strategies to process that I feel like the hunter in Predator with a constant grid of data flashing in my vision. How far away is my opponent? How fast are they walking? How wide is the sidewalk? What is the grid of the streets if I need to turn off and will there be others on those paths? Will the soon to be passer-by suddenly turn glowing blue and attack me?

Okay, that last one is not really in my calculations, but it might as well be. I can almost chart out the dots that I must follow as I make my way forward. Will we meet at a driveway where there will be room for both of us to pass with adequate distance? Should I stop now? Should I step onto the sodden grass, or will they? Relax! They’ve crossed the street. Crisis averted until the next chance meeting.

Americans are faint of etiquette and protocol in the best of times. I have been nudged by bikes along the trail whose riders decided it was easier to pass to my right than my left. I have been jostled by pedestrians in my lane too intent on their virtual lives to notice the actual one approaching them. Now that the stakes have raised, maybe we’ll learn some manners. At the very least, we can replace our computer games with the daily strategy and tilt-less intrigue that a walk now promises. 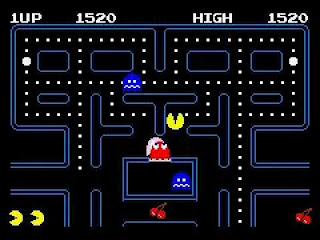