On the Tomb of Mary of Burgundy, Bruges, Belgium.

Not all stories are told in words.  A work of art can have enormous impact where language is simply too limited.
Traveling in the city of Bruges in Belgium a few years ago, I chanced upon the tomb of Mary of Burgund with its marvelous effigy sculpted upon her death in 1482.  I was swept away by its peaceful beauty and the tale of human emotion that it imparted.  For the length of my stay, the tomb became a place of pilgrimage.  My visits to her moved me daily and, when I finally had to tear myself from her side, the memory became a steadfast source of calm and comfort.  These are the words I wrote on my return home: 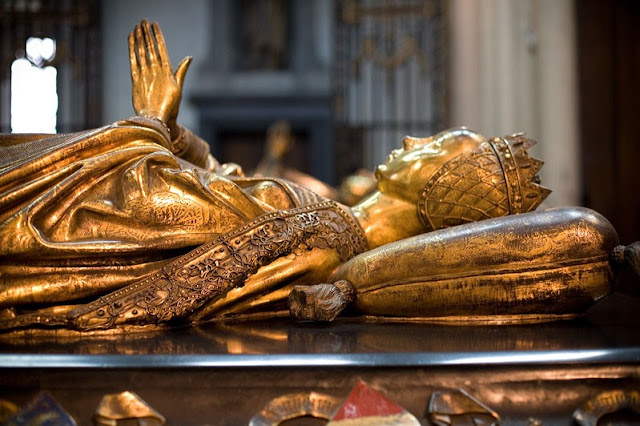 “Her golden effigy lies in comfort on marble brocaded cushions.  Carvings of filigreed silk cover her body in sumptuous imitation of her living gowns, caught eternally in restful poise on her sepulchral bedding.  Her eyes speak of holy faith, but also of human spirit, lively and playful.  Her blossom mouth, small but elegant is pursed in a wry smile as if the new mysteries were just a continuous part of the rich humor of her life.  The small soft chin, no Hapsburg jut for her, points upward with indomitable courage.
Mary’s hands are clasped in prayer.  Unlike those of her father, Charles the Bold, on the tomb next to her which tilt toward his head in supplicant prayer, her hands reach straight upward as if she is about to open her arms in encompassing embrace.
At her feet, two small dogs lie obediently.  The hounds turn their heads up towards their mistress with cunning smiling faces, lapdogs well-used to play and cuddle looking for a game or a loving chuff of their heads.
What love inspired this wonderful monument!  The effigy is brilliantly crafted from death mask by artisans who worshipped her alive.  Surely their work was guided by the grieved father who sought to capture an eternal memory of her dear form.  Although she may have been insignificant by historical record, her tomb lies centrally in a majestic chapel of an important church in her father’s capital.  The father enshrined her at the very heart of the magnificent edifice, leaving only room for himself to pass the eternity of days next to his beloved daughter.  Mary’s hands are worn and polished – grabbed by pilgrims and supplicants seeking her graceful intervention for their prayers.  More moving still, her right cheek has a burnished patch as well.  Imagine her father praying each day by her side and then touching the beloved face as he did in life, until the monument bore the permanent imprint of his love.”