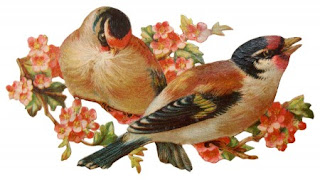 Spring has seized the region and everywhere animals play out their old, old urges.  High in the sky, two hawks cavort around each other delighting in the sweep of the warm breezes as well as each other’s company.  More earthbound, a lush red squirrel gives her would-be lover a breathless chase.  She sidles up trees, dashing limb to limb, ever staying one branch ahead of his lusty attentions.
By my window, three small sparrows swoop and fetch.  It takes a moment to decipher but as the game plays on two males boldly wrestle and bristle, squawking ferocious challenges to each other while a tiny female looks on with jaded eyes.  After posing and strutting, puffing and fidgeting the two take chase again.  One of the males takes a momentary lead, rapidly overtaken by the other.  To their fierce competition, the small gray she is now a fleeting blur that sails just ahead of their wingspan.  Just before reaching her, the males stop and replay their elaborate choreography.  It is not enough to catch her.  They must win her small rapid heart as well.
Stop and chase, stop and chase – the game swoops high into the trees and low to skim the lowest brushes.  Each pass sweeps a widening circle through the yard.
Perhaps she has chosen.  Perhaps the song of one or the head tilt of the other has melted the cruel coyness of her spirit.  Perhaps the males are wearying of the chase, wondering if the small she is worth the effort.  The threesome assays one last broad pass to skim the flagstones on the deck.
A jarring thud.  A small forlorn squawk.  The tiny female lies broken at the base of my broad window.
The two pursuers land at her body.  Each male gives a pallid shadow of his courting display.  Each male tilts a befuddled head at the responding stillness.  With a wistful chirp, each male flies off into an opposite sky.