It be Speak Like a Pirate Day, me buckos.  Arrrh.  Grab yer hornpipe and cut yer jib for smooth sailing.
I wonder why we assume that pirates ever sounded like that, speaking with a horrible cockney brogue broken with guttural growls.  In our imaginations, even pirates on Dutch or Spanish or French ships sound like they were just Shanghai’d in Stepney. 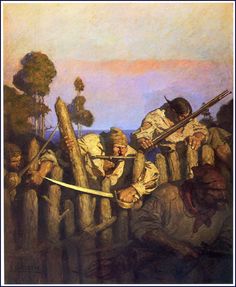 Our most enduring image of pirates comes from the book and the various movie versions of Robert Louis Stevenson’s Treasure Island.  The cut of the pirate suit, the filthy bandanna across the brow, the garish rings in both ears leap out at us from that quintessential story.  But if you read the dialogue, there is nary a “shiver me timbers” or a “belay that” to be found.  Stevenson, a Scotsman who traveled throughout the world, might have heard the flat southern accents and the colorful expressions of English seamen on his travels, but he chose not to garble their talk into Piratese.
It was the movie makers that filled in the sounds, just as they brought all aspects of American imagination to life.  In the classic 1934 Hollywood versionof the story, the director needed an instant representation of how far into the dregs the brigands had sunk.  So although most of the backup actors were American, they can be heard growling in an unlikely mix of Irish and West London accents, some barely intelligible as human speech.  Even the great Wallace Beery, the classic embodiment of Long John Silver was born in Missouri.  His booming bass and the outlandish seadog utterances were meant to project low-born and criminal.  Because of the power of his portrayal, they became the essence of how pirates are meant to act and sound.
Of interest, other contemporary buccaneer movies, like The Sea Hawk (1940)or Captain Blood (1935), have the British freebooters speak in cultured tones.  Even the least noble of them has a rude poetic quality.  Of course these were British actors and were cast as the heroes of the show.  It was the French or Spanish brigands who do the grunting and the swearing.
So what would a real crew of pirates have sounded like?  It would have depended on factors such as who owned the ship, where was the crew recruited, what seas did it ply?  There would be a range of worldliness from callow rural runaways to the unlucky sons of richer families joining to escape debt or by misadventure.  There would be a wide range of accents and dialects, and even languages, since most pirate crews were not recruited along national lines.  There were probably pirates who sounded very much like you.
But where is the adventure in that?  On a fine made-up holiday like today, feel free to drink some grog, toss your tricorn and clay pipe in the air, play the pipes and dance a jig, feed a few crackers to Polly and praise a many of “me hearties” as you can.  The image is too fixed in our imagination to change now.  And if it makes you feel freebooting and swashbuckling, than a fine wind in your sail, lad.
Arrrh.