Why We Love Dragons

Literature is full of flying lizards.  Some dragons blast fire from ravenous snouts.  Some dispense anile advice through mystic telepathic bonds.  Some make knights in armor look good.  Some demolish ogres and trolls.
Why is there a fascination with dragons above all other creatures?  Unicorns seldom appear in adult fiction despite widespread popularity among medievalists and young girls,  Although a basilisk made a brief and terrifying appearance in J.K. Rowling’s Harry Potter and the Chamber of Secrets when was the last time anyone wrote a good manticore novel or a juicy echidna tale?  Yet dragons continue to dominate fantasy literature and even cross into general fiction as well.
Having worked on two as yet unpublished dragon books and with the promise of more on the way, I have puzzled over what attraction of these beasts keeps authors and readers revisiting them.  Here are some of the reasons why dragons have become loved and respected members of my cast of characters. There are universal points that have embedded them in the collective imagination. 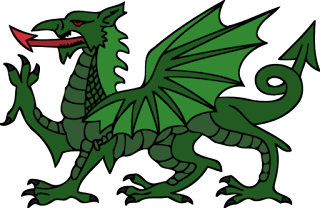 DRAGONS ARE A BLANK SLATE – Other mythic beasts are hewn from rigid traditions.  The lore of vampires or werewolves weighs down any writer.  Tolkien’s strict classification of goblins, orcs and other beasts forces an author to either conform or defend any innovation.
Dragons have no single tradition.  There are vast differences in the creatures from culture to culture and even within a solitary mythos.  They may be unimaginably huge or approachable in size.  They can come in any number of colors.  They can channel fire or ice or even water for their powers.  They may be winged or apteric.   They may be mindless and feral or wise and nurturing (but not tame).
This diversity of heritage gives rise to a range of characteristics, of personalities (or dragonalities) depending on the needs of the story.  Thus, the dragons in Malory’s Le Morte D’Arthur can be vicious beasts whose whole purpose is to be vanquished by noble and saintly knights.  Tolkien’s Smaug can be a hyperintelligent but merciless and arrogant killer, making him one of the most developed characters in The Hobbit.  Saphira in Christopher Paolini’s Inheritance Cycle can be protective and sisterly to her young human partner.
No one can ever say they have heard all the dragon stories.  The limitless permutations mean that each story or book is as unique as the dragon itself.
DRAGONS ARE POWERFUL – At some point in every book ever written, the reader wishes for a character who can rise up and overcome the interminable obstacles that the author devises.  Dragons embody the power to do that very thing.
While not immortal or indestructible, dragons are formidable to the point that no odds seem insurmountable.  Their ennobling strength gives them both versatility and attraction.  It makes them proud enemies that lend glory to the meekest of protagonists.  As heroes themselves, their power can be relied on to deliver a satisfying victory.
DRAGONS ARE MYSTERIOUS – The reader can never presuppose dragons the way they can a humanoid creature like a zombie or a vampire.  Every reader knows what a werewolf will look like before the creature even appears.  But the range of appearances and powers available to dragons make them impossible to anticipate. Even as the creature is revealed, there is so much residual mystery that they always seem to be on the verge of recognition like a voice in a dream.
Since no one in a story ever knows all the secrets of dragonhood, the vagueness allows a writer to engage in a classic slow reveal.  Each small morsel provides new plot tensions and unexpected tangents.   A reader should be forever and deliciously uncomfortable in the midst of a dragon story.
DRAGONS ARE SCARY – In addition to their power and their size, their mystery and magic, dragons are physically unsettling because they are giant reptiles.  They are often linked with snakes, a source of primal and Biblical fear.  Scales impart a sense of tactile discomfort for tender-skinned readers, as well as a sense of untouchable hardness and coldness (even in the fire breathing ones).  Their reptilian otherness lends a nightmare aura which both thrills and fascinates.
DRAGONS ARE ECO-FRIENDLY – Since dragons source their power from nature, they are inherent champions of the natural world.  A modern reader, cognizant of environmental concerns, may recognize the power and freedom of the creatures as a testimony to the strength of Earth.  Dragons often are pitted against the nature-smothering forces of civilization.  Even when they are killers, we recognize their inherent beauty in the same way we are attracted to a waterfall or a volcano.
DRAGON CAN FLY – All humans enjoy reading about creatures that can soar through the air.  One of the most challenging and pleasurable parts of writing my books was to convey the sense of wonder in the flight of my dragon.  Such a scene is fairly easy to describe from the perspective of a human catching a ride, but readers don’t want to be carried through the sky.  They want to fly themselves.  I tried to describe it from the dragon’s point of view.  Does she feel the cold wind as it buffets her?  Does she feel the air cushioning her?  Does she delight in the sense of speed and power?
“Her heart soared and raced.  She gave a great dragon grin and leaped from the platform.  Wind rushed by her, but… she embraced it.  She felt the cool air caress her outstretched wings and lift into a smooth line.  She tested her diving and her soaring and found the moves to be as natural to her as walking or stretching.  She even went through a quick roll, exhilarated at the power of control.”  (K. Mankin, Dragon Symphony, Chapter 13) 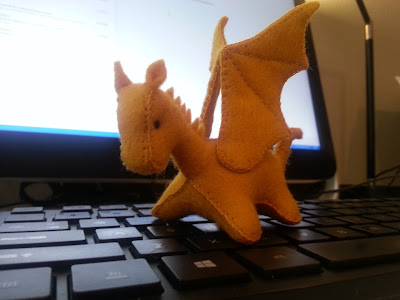 My dragon, Allegra, courtesy of MtnGoddessStudio
There are surely other reasons, personal and distinct, for a dragon’s ability to captivate.  I confess to being under the spell of the magical and mystical creatures.  A golden dragon sits by my keyboard and tells me her story on a daily basis.  Even when I am not writing about her, she fills me with inspiration and wonder.  And when I close my eyes, I dream of flying by her side, my wings pushing me through the air with insouciant power.